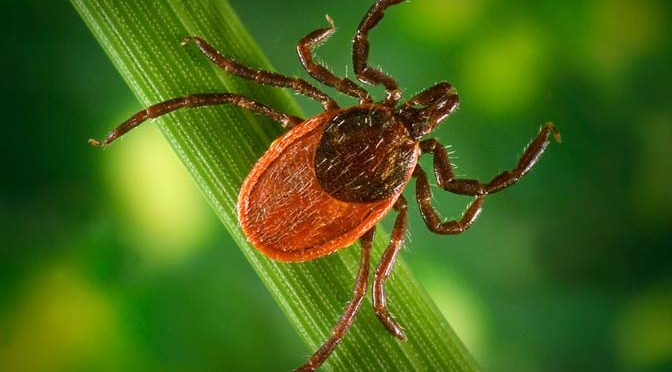 Ticks are mean customers. Stay safe! Learn how to protect yourself, your family, and your dog from ticks on cape cod.

We’ve assembled the tick safety info below from the U.S. Centers for Disease Control and Prevention and the Massachusetts Department of Public Health.

Lyme disease is carried by a tick commonly known as the deer tick (or black-legged tick). Deer ticks pass the bacteria to a human or animal as it feeds upon their blood.

Other types of ticks exist in Massachusetts and can pass other diseases, but it’s the deer tick and Lyme disease that you need to worry most about – especially if you have children or pets.

Deer ticks are active on Cape Cod year round — especially during years with mild winters.

How bad are ticks on cape cod? Take your dog on a walk in the woods and you’ll find out pretty quickly that many areas are completely covered with them. It’s not uncommon to pull a dozen or more ticks off of your dog after a walk, and many people will avoid narrow trails altogether.

Understanding how ticks feed and spread disease can help you protect your family and pets.

Deer ticks have a three-stage life cycle. The adult tick is active in the late fall and early spring while the larvae and nymphs are active during the late spring, early summer, and fall.

All stages of deer ticks can be carried by dogs and cats. But the usual hosts are woodland mammals such as the while-tailed deer and white-footed mouse.

Adult ticks feed and mate on large mammals in the fall and early spring. Female ticks drop off and lay eggs on the ground in the spring.

Small larvae hatch and feed upon white-footed mice, other small mammals, and birds. If the host mammal is infected with Lyme disease bacteria, then deer tick larvae will become infected. After they feed the larvae are inactive until early spring, when they molt into the nymph stage.

Nymphs that have picked up the bacteria in the larval stage are capable of transmitting the bacteria to humans or other hosts, including pets. This stage is most active in June, and causes more cases of Lyme disease than the adult tick.

In the late spring and summer nymphs seek a host for a blood meal. The host may be a small mammal or bird, but if you’re unlucky it may also be a dog, cat, or a human.

After feeding, nymphs molt into the adult stage. Adult ticks start the cycle again by feeding on a large mammal such as a deer, pet, or human.

Note that both infected nymph and adult ticks can transmit the Lyme disease bacteria. These ticks may also transmit Babesiosis and Ehrlichiosis.

Types of ticks on Cape Cod

Note the relatively smaller size and teardrop shape. The dorsal shield is blackish; the abdomen is reddish-brown. The male tick is uniformly dark brown.

Here’s how deer ticks look when they’re engorged after feeding:

The dorsal shield of the commons dog tick is whitish; the abdomen is chestnut brown.

Female dog ticks become engorged or greatly swollen during a blood meal. The color of the abdomen changes to a uniform gray.

The male tick is mottled gray.

The Lone Start tick is a relatively recent arrival on Cape Cod. The female Lone Star tick is easily identified by her pronounced white dot or star in the center of her back.

This tick is not a passive opportunist like the more common dog and deer ticks. While those tick species wait until a host makes contact with them, the Lone Star tick will actively pursue a host.

How to identify a tick

Using the image below you should be able to identify deer ticks (aka black-footed ticks), dog ticks, or lone star ticks.

Not finding a match? Check out the Center for Disease Control’s tick ID page that describes all the different types of ticks in the U.S.

How to Protect Yourself from Ticks

Where ticks are found on Cape Cod

Deer ticks are most often found in woodland habitats such as hiking trails, conservation lands, and other forested recreational areas. In other words, the places everyone goes with their families and dogs when they’re outside on Cape Cod.

They move onto brush, vegetation or tall grasses (including beach grass!) as they seek a host. Ticks don’t jump or fly. They crawl onto and cling to humans and animals that pass by.

If you’re going to be walking in these types of areas, take the following precautions.

Where to check yourself and children for ticks

A careful tick check is the most effective way to protect yourself, your family, and your pets from Lyme disease.

After outdoor activities, brush off clothing thoroughly. Do a visual inspection. Pay attention to folded areas such as cuffs, belts and shirt collars. Ticks love to burrow in.

Do a complete body check on a daily basis. Check children and pets more frequently, and especially each time they’re done playing outside.

Inspect the hairline and scalp as well as difficult-to-see areas such as the back. Checking yourself and kids when you shower each day is a great idea, it’s much easier to spot them when clothes are removed. Don’t forget to check the clothes too, sometimes ticks are still crawling around there before they get to attach to your tasty flesh.

Where to check dogs for ticks

Ticks may hitchhike indoors on pets or clothing and then fall off. Dogs should be checked for ticks on a regular basis, particularly around the eyes, ears and underbelly.

Tick removal for pets follows the same technique that is used on humans. Ask your vet to recommend a tick preventative product to kill any ticks who do bit your pet.

One of the best ways to protect your family and pets against ticks on Cape Cod is to spray your yard with pesticides.

But tick spraying alone won’t solve the problem. It’s best to try and eliminate areas where ticks may live prior to applying pesticide. This includes:

What to do if a tick bites you

How to remove ticks the right way

A tick’s mouthparts are barbed like a fish hook. Once inserted, a cement-like substance is released, making tick removal difficult. Proper and prompt removal of ticks includes the following steps:

Want to learn more about how to remove ticks? Check out the CDC’s webpage on tick removal.

Also if you’ve been bitten check out their “Tick-bite: what to do” PDF.

Most people who get Lyme disease don’t even know they’ve been bitten by a tick. Deer ticks are tiny and they’re easy to overlook.

The symptoms of lime disease at the early stage include:

Getting a round or circular rash is a tell-tale sign. But many people who have Lyme disease don’t develop a rash. If you think you may be infected don’t wait. See a doctor right away. Antibiotics can be prescribed to help treat it.

If you live or vacation on Cape Cod then you are at risk for Lyme disease. See a medical professional right away if you suspect you have it.

Learn more about Lyme disease on the Mass.gov website.

The symptoms of Lyme disease are easy to confuse with other illnesses so they’re often overlooked. Antibiotics are generally prescribed for treatment.

The bacteria can move very quickly from beneath the skin to deeper tissues in the body quickly (before the blood tests can detect evidence of illness). Because of this some doctors choose to treat preventatively before symptoms arise.

Our page contains tick safety information about ticks on Cape Cod that was compiled from the U.S. Centers for Disease Control and Prevention, the Massachusetts Department of Public Health, and the Town of Brewster.

Here are some links to their sites if you want to learn more about ticks:

Ticks are mean customers, be safe!