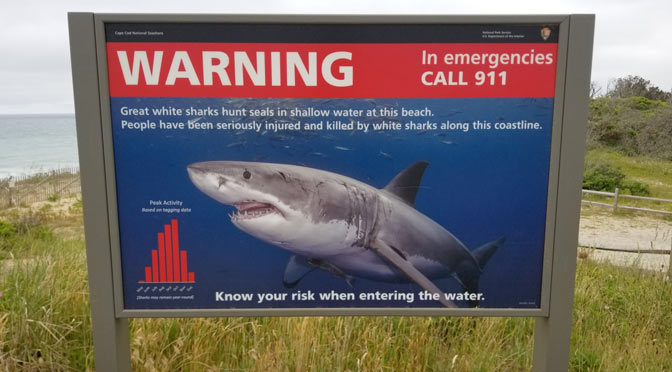 The number of great white sharks on cape cod has exploded in recent years.  Before you venture out into the water, make sure to be aware of the danger.  Shark attacks on people are rare in Cape Cod waters, but that doesn’t mean it can’t and won’t happen.

Why are there so many great white sharks on cape cod?

Seal poop.  Yup, seal poop.  As the grey seal population has exploded in recent years, so have the number of sharks looking for a fat, blubbery meal.  Ocean currents carry seal fecal remnants far away, where great whites’ keen sense of smell draws them into the source of all that poop.

Each year great white shark sightings on Cape Cod increase in greater numbers. Get used to it.  And keep in mind that all the seal poop is in the water where you swim.  Yuck.

Prior to the 2018 death of a bodyboarder on Newcomb Hollow Beach in Wellfleet, the last human who died from a shark bite on in Massachusetts was nearly 100 years ago.

While the recent shark activity on the capeis due to great whites, that fatal 1936 attack was thought to be a bull shark and not a great white.

In 2012 a swimmer was attacked by a great white while swimming off Ballston beach in Truro, Massachusetts.  It was an exploratory attack, and the swimmer was able to make it back to shore.

In 2017 a shark bit a paddleboard off of Marconi Beach in Wellfleet.  In recent years there have been a few incidents of sharks harassing kayaks.

Videos of great white sharks sightings on Cape Cod, including feeding on seals a few yards offshore of beaches on the outer cape, circulate the local and national news each summer. Beaches frequently are closed for swimming due to shark sightings onshore, from boats, or from tracking planes.

Unfortunately it’s only a matter of time before someone else gets bitten, but thankfully shark attacks on cape cod are relatively infrequent.

How can I prevent getting bitten by a great white shark?

To avoid getting bitten by a shark, follow these tips to avoid a great white shark attack.

And remember, the only surefire method to avoid a shark attack on the waters of cape cod is to stay out of the ocean. swim in a freshwater kettle pond instead.

But that’s not realistic advice. If you do go into the ocean, don’t go in too far. Avoid seals when possible (which is pretty much impossible at many beaches on the outer Cape).

The Atlantic White Shark Conservatory has a cool website with maps of Cape Cod shark sightings and activity from great whites they have tagged. Check out their site to view the map or download the Sharktivity app.

Note that there’s no guarantees, they tag and track just a small amount of the shark population. But it is nice to know if they just reported a shark at a beach 1/2 mile away from where you’re planning to take a quick dip in the ocean to cool off.

If you see a shark spotting airplane circling offshore off the beach you’re visiting, that’s another sign of likely activity in the water.

What beaches on cape cod have the most sharks?

All ocean beaches on cape cod have sharks. But great white shark sightings on cape cod are more often documented on the outer cape beaches, stretching from Monomoy Island in Chatham up Nauset Beach in Orleans, Eastham, Wellfleet, Truro, and Provincetown.

If there are a lot of seals near a beach, then there’s likely an increased presence of sharks.  And the seals seem to be everywhere these days.

But pay particular attention on the outer cape cod beaches, they’re more likely to have great whites prowling about. Lifeguards at protected beaches will alert you when shark sightings occur.

Are there any cape cod beaches without sharks?

Just the ponds.  It’s definitely less likely to run into a great white on bay-side beaches, or those off of Nantucket sound on the south side of the cape.

But sharks are still there, so don’t think because the beach you visit isn’t on the TV news or getting fly-overs from the shark spotting planes that there aren’t any hungry great whites in the area.

Sharks can travel long distances on their search for tasty seals, so there really aren’t any ocean beaches on cape cod that don’t have sharks.

How to spot great white sharks

Most shark sightings on cape cod aren’t of the classic “fin cutting through the water” variety shows in Jaws.

You’re more likely to see a dark shadow cruising by. Polarized sunglasses help a lot with this.

If you do see a shark, make sure to let everyone know. Beaches with lifeguards can radio it in, which helps alert other beaches nearby.

Logging the sighting on the Atlantic Conservatory’s Shark Tracker app is helpful too. But since sharks cruise up and down the coast all day long, generally they don’t stick around in one place too long so that isn’t the best way to try and locate a shark to see unless the report is only a few minutes old.

Types of sharks on cape cod

Most of the types of sharks on cape cod are seasonal, hitting Massachusetts waters during their seasonal migrations. Sharks typically appear on cape cod in the warmest months, from May to November. Only one species, the Porbeagle, lives year round on the cape.

Great white activity picks up just as the waters warm up and extend through the fall. This is also the timing of the tourist season on the cape. So this problem isn’t going away.

What should you do if a shark attacks you?

Typically a great white shark attack will occur when you’re not expecting it.

They’ll crash into you with great force for an exploratory bite. Feel free to punch the shark in the eye or gill if you can. Most often when they determine that you’re not a seal they’ll leave you alone.

If you do get attacked by a shark, don’t panic. Relax. Take a deep breath. Simply swim back to shore and get medical help.

It all sounds so easy here, but in reality you’ll be in shock and lucky if your legs or arms are still moderately attached to your body while the blood pours out from the razor-sharp rows of serrated shark teeth. Just try to make it to shore while others call for help.

Cell phone service on the outer cape beaches is improving in recent years, but there still are dead zones. Some beaches have added call boxes to assist in reporting beach emergencies, but many don’t have them.

Is my dog safe from sharks on Cape Cod?

No shark attacks on dogs have been reported that we know of.

And you can bet that TV news would be sure to let you know if it ever happens. Shark sightings are excellent clickbait for news outlets, and shark attacks drive viewer interest through fear.

If a dog gets attacked, it will be a national news story that night with comparisons to Pipet the dog, a black lab who was one of the unfortunate shark attack victims in the original “Jaws” movie.

But if you plan to throw a tennis ball far out into the waters (especially off of outer cape beaches such as Nauset Beach in Orleans, or any of the Chatham beaches, including South Beach and Monomoy, or all beaches of the Cape Cod National Seashore) then this this “no attacks on dogs yet” mantra is very likely subject to change.

Be smart when letting your dog swim on the cape’s ocean beaches.

Keep them close to shore to reduce (but not eliminate) the risk.  Same with your kids. Please.

Fishing for Sharks on Cape Cod

Catching a big shark on a rod and reel can be an amazing experience. But don’t tell that to a hopeful tuna fishermen whose bait gets stolen by a shark, there’s nothing worse than the ruined rig and ruined spirits that result from a shark on the line.

Great white sharks are protected, as are several other species on cape cod such as basking sharks, sandbar (brown) sharks, and sandtiger sharks.  Don’t go fishing for these species. Cut them loose unharmed if you get them.

Brown sharks can be caught right off shore on the Nantucket sound beaches at night. They’re harmless but use caution if you get one, and make sure to release them unharmed. Don’t drag them on the beach to release them, do it in the water.

Great white sharks on cape cod aren’t typically targeted by fishermen. In 2017 a video surfaced of one unlucky fisherman reported having a white shark attack a striped bass he was reeling in. Similar reports pop up frequently.

So use caution even if you’re not trying to fish for sharks, you might end up catching one anyway.

Cape cod’s great white shark population has been growing every year, and shark sightings will continue to increase. With a little common sense and a little more luck, hopefully it will be a long time before we see another great white shark attack on cape cod beaches.